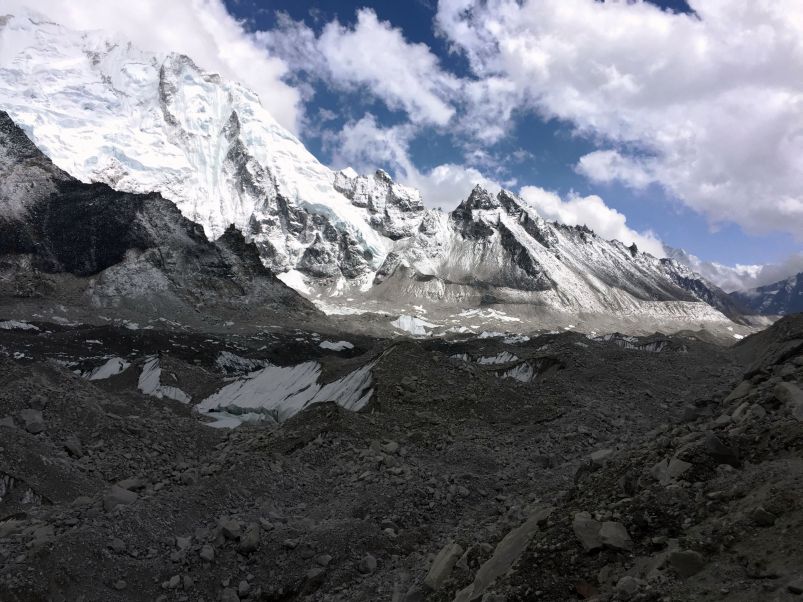 Being curious, I asked a buddy if I could take a look at her Trip Notes for her planned sixteen day trek to Everest Base Camp, before she departed in May this year.  Because, at 5380m (17,600ft), I wanted to know what sort of training and physical fitness they’d recommended for what I consider, an extreme feat.

Ange was certainly well equipped and her preparation included high altitude training in a South Melbourne gym for weeks before her ascent. Some three weeks after her departure, a Facebook post appeared on her page to proudly announce ‘I made it’.

Having just celebrated fifteen years as a flight attendant with Qantas she has travelled to most parts of the world on adventure holidays either skiing, golfing, trekking, cooking, cruising or cycling, as well as being based in London for three years.

Continuing my theme of talking to inspirational travellers, I asked her:

Why did you choose the trek to Everest Base Camp? ‘It was a lifetime goal that I had hoped to achieve before I was 40.  However, it wasn’t until in my mid-fifties, when I had just finished a lengthy house renovation, that I needed to do something for my mental and physical health.  I had an understanding of the level of fitness that was required, but left myself only four months to do this.

What training did you do? On my days off from flying to Los Angeles or Dubai, I worked out in the gym or would go on hill walks in country Victoria, do the 1000 Steps in the Dandenong Ranges and other suburban walks.  I did altitude training at a specialised gym in South Melbourne which really tested me out. I would highly recommend it to anyone considering an altitude trek.

Who went on the trek? There were fifteen in the group with a wide range of life experiences and ages spanning early twenties to late fifties.  Interestingly, we were mainly women – three single, three married sisters traveling together, a mother and daughter plus three couples, whereas the group in front were nearly all male.  We had two Sherpas and one guide.

Where did you stay overnight? We stayed in different Tea Houses on the way. The higher we climbed the more remote and basic they became until there was no running water or heating except for a stove in the middle of the room to burn Yak poo usually lit around 4-5pm.  Higher up squat toilets were often outdoors and at night we’d have to be careful not to slip over on the black ice on the floor. I went for at least 4 days without a proper wash and was thankful for hand wipes.

What was the most challenging part? Each day was long and hard. I remember on Day 6 to Gorakshep, my Fitbit said I had done forty thousand steps.  But, the day after conquering Base Camp, a few of us started at 3.00am for a climb to Kalapathar at 5545m to see the sun rise on Everest.  I was not feeling well with Khumbu cough (high altitude hack) and fatigue.  In the dark my flash light was weak and there were loose rocks on the steep climb. I was spooked when the water in my Camelbak froze because of the low temperature.  I only made it half way as it was extremely physical and challenging, but I did see the sunrise.

In the Tea Houses, a typical menu for a day’s trek started with porridge, omelette or toast for breakfast.  At nights I chose soups or stews especially garlic soup or sherpa stew, it was delicious.  As we climbed higher with the lack of oxygen our appetite diminished. It was not untill we were back in Kathmandu did we consider a celebratory drink.  By the time I got home l was so looking forward to a home cooked meal, a good steak and a glass of red.

The three things you were glad you packed included:

Fortunately in Kathmandu, I met a girl in our hotel who had to be helicoptered back to Lukla. She gave me great advice on how little I needed especially as we were limited to 8kg on the flight into Lukla. I heeded this and used everything I had.

The next two adventures I am planning are: skiing in Canada in February and the Coast to Coast walk, a 309km trek that passes through the Lake District, the Yorkshire Dales and the North York Moors in England in August.’

Well done to Ange for grit and determination to achieve her goal. If you’re feeling inspired to reach new heights, visit the company she travelled with at http://himalayansocialjourney.com.np

2 thoughts on “Trek to Everest Base Camp: a lifetime goal achieved”