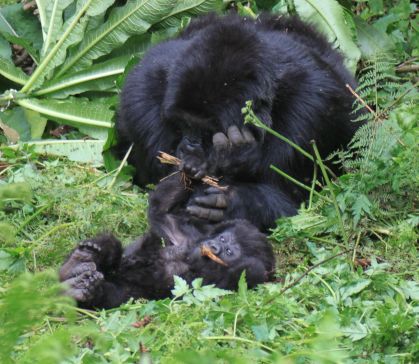 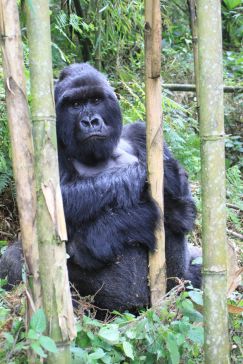 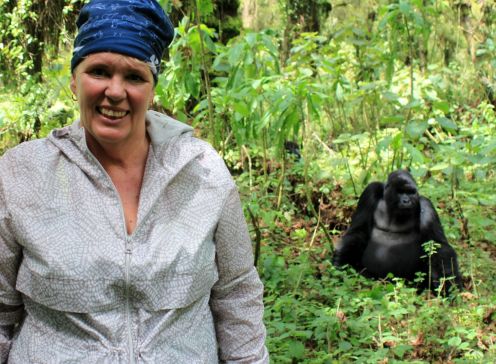 Our guest blogger this month is a golfing friend of mine who has recently returned from Rwanda to visit the Mountain Gorillas. Jacqui says she specialises in being an ex: she’s an ex-teacher; ex-bus-driver; ex-marine biologist and ex-farmer, but despite living in Melbourne, she will always be a Kiwi. When not travelling she writes twisted, sexy fantasy and science fiction stories.

Why Rwanda to see the gorillas?

I didn’t particularly want to go to Rwanda, but of all the locations to see the mountain gorillas it was, ironically, the safest. As a biologist I’ve always had a fascination for wild creatures and the opportunity to see these magnificent animals face to face was one I couldn’t turn down. As a species they’re critically endangered and despite the ongoing conservation efforts they still face many challenges.

What did the trek involve?

Only 80 gorilla permits are issued daily at the Five Volcanoes National Park Headquarters and groups are limited to a maximum of eight with different levels of trek available.  Our trek was around five hours.

Starting in a local village, we each hired a porter to carry our bags and assist us which was well worth the investment and a valuable contribution to the local economy. We set off through fields of sweet potato and cultivated pyrethrum, and into the bamboo forest where the main hazards were muddy patches. Any tricky spots the porters grabbed our hands to help us stay upright. The climb wasn’t obvious, but we eventually emerged above the bamboo to enter the forest proper.

From there the trek got more challenging with the guides cutting tracks with machetes to get us to where the trackers had found our gorilla group. To everyone’s consternation the gorillas were down in a crater and there was much discussion amongst our guides about how to get us safely down. In the end it involved a lot of sliding, slipping and falling, and being dragged along by our porters…very undignified!  High up the side of the crater we met with the trackers and left our bags with the porters.

The head tracker grabbed my arm, pushed me ahead a few metres and I found myself face to face with Guhonda the 220kg silverback, the leader of the Sabyinyo group. I could barely comprehend that after all that struggle, he was in front of me eating leaves without a care in the world.

The Sabyinyo group is quite large, and the newest baby was only a few months old and never too far from his mother, while other youngsters scampered up and down trees in play. We had an hour of contact with the group as they made their way to the bottom of the crater.

The trek out was a scramble. We were literally dragged up the far side of the crater and marched out of the forest in about half an hour arriving back to our guide exhausted but happy.

How close did you get to them?

We’d been told to keep a distance of around seven metres between us and the gorillas, but the forest was so dense on the sides of the crater that we ended up about two metres away. It was astounding to be so close to such powerful animals. During the descent the trackers were amazing at managing the interactions with the blackbacks (younger males), who would charge us, beating their chests. So, the closer calls were at the instigation of the gorillas not us.

What preparation did you do for the trek?

I worked on my climbing fitness, using the elliptical trainer and leg press at the gym. As I’d been in Scotland prior to Rwanda I maintained this with lots of forest walks and climbing the odd mountain on the Isle of Skye. Despite my efforts I found the trek physically challenging and wasn’t prepared for the speed the guides and porters moved.

What advice would you give to other people going there?

What would you do differently?

Despite the physical challenges and hefty cost (US$1500 for a single day permit), I’d book in for a second day. I was quite overwhelmed by everything on the day and I think I’d have been able to appreciate the moment a bit better given a second opportunity.

Do you have any regrets?

Tasmania first and then…well those Orangutans are in a bit of bother too. So, Malaysia or Indonesia…I need to do some research!

You can read more of Jacqui’s writing at http/www.jacquigreaves-author.com

We’re always on the lookout for other amazing expeditions, so if you’d like to share, email us at welove@simplyjoolz.com.au