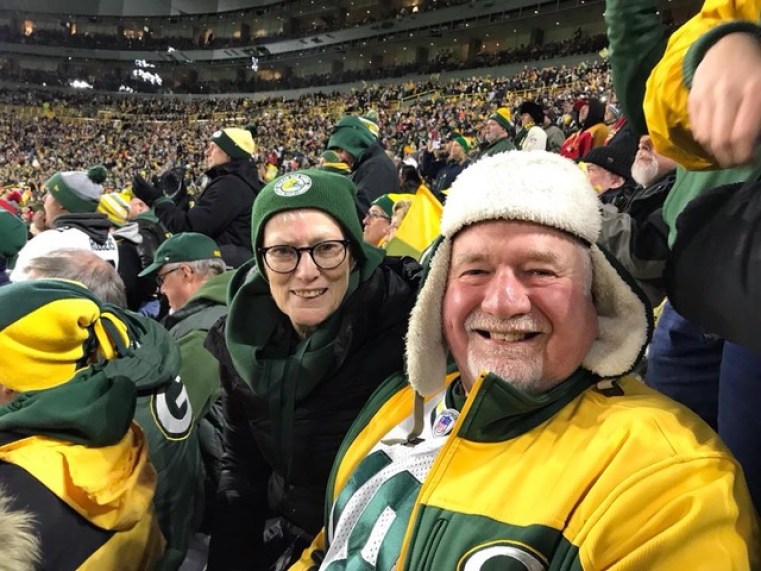 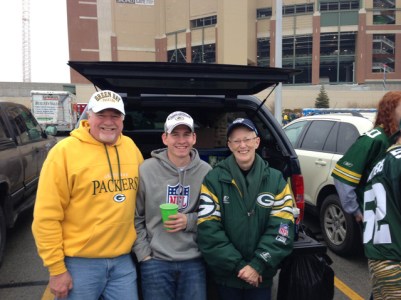 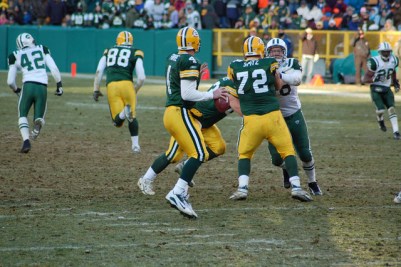 Bucket lists, wish lists, to do lists, call them what you like, there’s nothing more satisfying than ticking them off. That said, a yoga-buddy Liz, added the Green Bay Packers NFL team to her list in 2000 after being diagnosed with a life-threatening illness. She has since travelled to the States twelve times to see them play and, they still remain on her list.

Liz, a baby boomer who grew up in country Victoria, has always been keen on sport and developed a passion for the Geelong Cats when she was eight years old. Her interest in the Green Bay Packers was piqued in 1991 when she saw an ABC program hosted by the late Don Lane about American Football featuring the Packers. I asked Liz:

Why the Green Bay Packers?

Since seeing them on TV I had become a big fan and I had never visited the United States, another bucket list item, so I decided that 2005 would be the year I ‘ticked’ them off.

The first year I visited I had a great time. Everyone I met in Green Bay was friendly and outgoing and it helped that the Packers won. I have been every year since, except 2008 when I was unable to travel outside Australia because I was still recuperating from a renal transplant. Though, I did make up for the missed year in 2016 when I attended two games. I have made many friends in Green Bay and now I stay with my friend Beth who I met when she sold me the tickets to my first game in 2005. I also go tailgating with her family and friends before or after the game. This Green Bay tradition in the Packer’s car park usually involves barbecues, eating and drinking from the back of vans, trucks or mobile homes and playing games.

How do the Packers differ from other NFL clubs?

The Packers are the only team in the NFL not privately owned by an individual, usually of the millionaire/billionaire variety, and they are non-profit. The team is owned, by and large, by the townspeople of the Green Bay area. It was established 100 years ago as a semi-professional club for the workers on the Green Bay docks, which are on Lake Michigan. They were given funding by the Indian Packing Company on condition that the team was named after the company. They are the only “small town team” left in the NFL as most teams are from major cities.

You’re an active member of Geelong, have you considered joining Green Bay?

No.  Shares are handed down from generation to generation and periodically, the Packers offer shares when they undertake major infrastructure works but I haven’t taken up the offer as they are quite expensive.

Which is the better game AFL or NFL?

I don’t think either game is better than the other. The AFL, in general, is more skilful in terms of the overall athletic skills of all the players who are unencumbered by equipment (helmets and rigid padding). I appreciate the nuances of the NFL game which relies more on tactics and different skill sets from its defensive, offensive and special team players. The playing fields are quite different too. The NFL grounds are standardised and set out in grid patterns whereas an AFL ground has much wider spaces and is oval shaped.

Do you know of any other Australians that visit Wisconsin regularly to see the Packers?

No, although I have met people here who are Packer fans. For instance, at the gym, I met Joe who comes from Neena in Wisconsin, and I now catch up with his sister and parents in Green Bay when I visit.

Do the Packers win or lose when you attend their games?

Let’s say that I have seen them win more than I’ve seen them lose. They had a win on my most recent visit in October this year!

What are the three things you usually take to a game?

As the weather can be freezing, the temperature got down to 0°C on my last night visit, I always take:

Have you a preference for wearing the Blue and White, or Green and Gold?

In the AFL season, I love my blue and white colours. But come the NFL season, I love my green and gold. In 2006 I managed to combine the two as Ben Graham, an ex-Cats’ player, was a punter for the New York Jets, so I went to that game in December in the snow and wore my Packers’ hat, which I got in 2005, and borrowed some heavy clothing from Beth. It was freezing and, unfortunately it wasn’t a good result for the Packers that day!

How long do you intend to go to the US to see the Packers play?