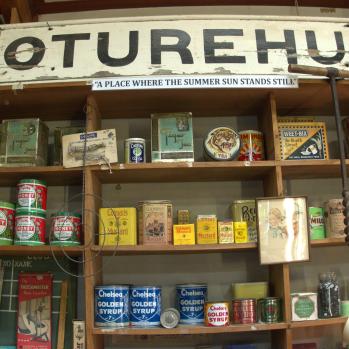 Oturehu?  Hmm, how does one pronounce this Central Otago hamlet where the summer sun stands still?  If you’re not from New Zealand you’re forgiven for floundering.

Here’s a tip: it seems that if a town starts with the letter ‘O’, pronounce the O as in ‘slow’. So here goes: O-Terry-Who-A! But wait, there’s more towns starting with the letter O on the Central Otago Rail Trail and they go like this: ‘ Omakau, Ophir and Oturehua’.  You can almost hear the train shunting along the tracks as you roll the O’s around your tongue.

The railway from Middlemarch to Clyde took 16 years to build and opened in 1907.  Since 2000 it has become known as the Central Otago Rail Trail and it’s enormously popular for cyclists of all ages as the inclines and declines are moderate. 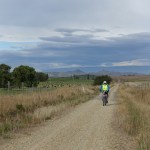 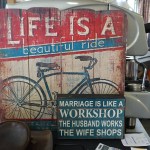 If you’re thinking of cycling allow 4 -5 days for the Rail Trail and start in Clyde just out of Queenstown to capitalise on the prevailing winds and the perception that there’s more downhill than up. It’s truly a memorable ride with fantastic infrastructure including bike hire and luggage pick-up available.

We passed four Wellington women ranging in age from the late 50s to mid 70s who seemed to be struggling and we could see why.  Not only were they height challenged, but their seats had not been adjusted to fit them so the problem was easily rectified.  Apparently cycling outdoors was pretty novel as they’d only ever ridden bicycles at the gym.

Each day’s route was mapped around the plentiful coffee shops and cafe’s, all strategically placed, often at railway sidings. Great coffee and home cooked fare was the norm. In the evenings, if you wanted to give your bike a rest, fine dining restaurants often included free pick-ups. It gets busy in the summer months so it’s worth booking accommodation early and there’s a great range from luxury, bed and breakfast to bunks or studios.

Naseby, which has the largest indoor curling rink in the southern hemisphere, is not on the Rail Trail but worth heading overland some 12 kilometers to visit. We scheduled a rest day for washing, eating, lazing and of course, curling.

With some guidance we were soon sliding on our knees or sweeping the ice harder than we had ever swept before. Once we spied our Wellington cycling friends a challenge was issued. Australia V NZ. The result….put it this way – we were better cyclists! 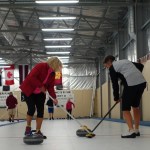 Curling Naseby: where sweeping can actually be fun 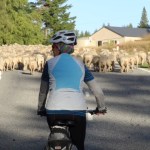 Cycling/droving in main street of Naseby

Two days later at Middlemarch, after 214k’s, we hung our bikes up and headed for the Taieri Gorge Railway, exhilarated from our ride and expectant of the next.

The scenic tourist train travels from Dunedin to Pukerangi and then returns. Don’t be perturbed as there’s absolutely nothing when you get to Pukerangi except a railway siding and a big step up to board the train.  It’s about a two hour trip and a train journey that befits time standing still whilst signalling the end of the Otago Rail Trail.